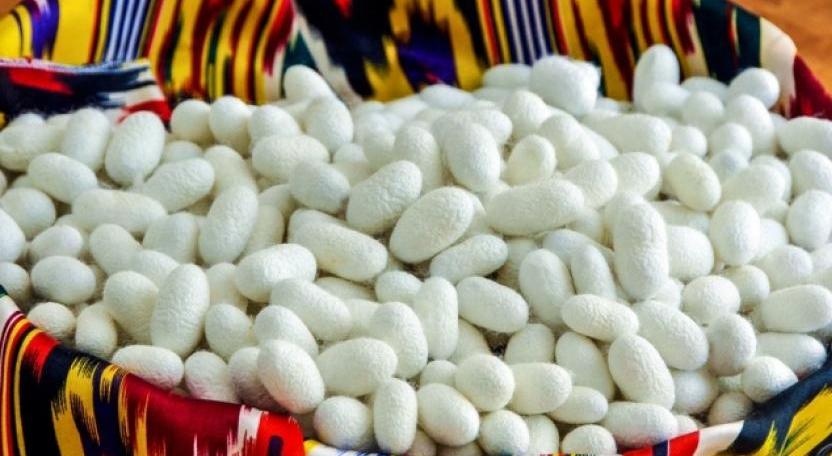 Great Success of Our Silkworm Breeders

Silkworm breeders of Uzbekistan have successfully performed the annual contractual obligations by preparing more than 26.2 thousand tons of cocoons.

This great harvest of valuable raw silk, gained through the self-sacrificing work of our silkworms, became a worthy gift to the 25th anniversary of the Independence of our Motherland.

According to the Ministry of Agriculture and Water Resources of the Republic of Uzbekistan, this year silkworm breeders of our country reared such highly appropriate to our climatic conditions and resistant to disease varieties of silkworms as “Ipakchi-1,” “Ipakchi-2,” “Uzbekiston-5,” “Uzbekiston-6”, and from each box of silkworm eggs received an average of 58.2 kilograms of the crop.

The main factor for this huge success of silkworm breeders was the fact that issues of creation of new varieties of silk cocoons and taking quality of raw silk to the level of international standards, reforming the raw conversion process, had been marked as a priority by the Head of our state.
However, the important factor of the effectiveness is the particular attention that is paid to financial stimulation of farmers. In particular, the purchase prices of cocoons increased on average by 11 percent and in the beginning of the season, farmers paid an advance of 43 percent of the estimated cost of the harvest.

Due to attention, paid to development of the industry, silkworm breeders of the Surkhandarya region were one of the first to rear silkworm cocoons. Enterprises carefully prepared for the season, in order to increase crop production and improve product quality.

In recent years, the expansion of existing mulberry plantations, strengthening the fodder base, the involvement of highly qualified specialists to season conduction, timely provision of silkworm breeders with necessary material and technical resources and equipment also played a crucial role in achieving the success of the industry.

Work at the reception units of silk cocoons is actively ongoing. Also, work on preparing for next year season conduction, the processing of mulberry plantation and pest control is continued.