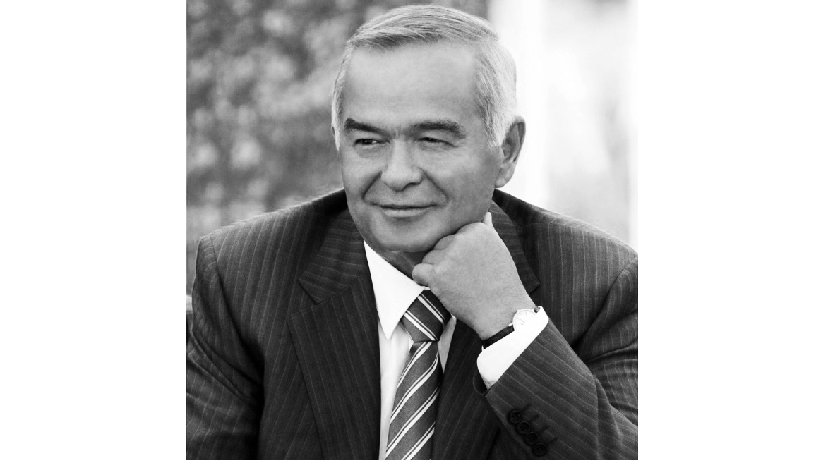 President of the Republic of Uzbekistan Islam Abduganievich Karimov

Our Fatherland, all Uzbek people suffered a huge and irreplaceable loss. An outstanding statesman and politician, the first President of the Republic of Uzbekistan Islam Abduganievich Karimov passed away after a serious illness on 2 September 2016.

Islam Abduganievich Karimov was born on 30 January 1938 in Samarkand into a family of civil servants. He graduated from the Central Asian Polytechnic Institute and the Tashkent Institute of national economy, receiving degrees as an engineer-mechanic and economist.

He began work in 1960 at the “Tashselmash” (Tashkent agricultural machinery) plant. From 1961-66 he worked as an engineer, a leading engineer-constructor at the Tashkent aviation production complex.

In 1986-89 he worked as first secretary of the Kashkadarya provincial party committee. Thanks to his great talent as a leader and organizer, his dedication and determination, ability and desire to be around people and to live with their concerns and interests, the situation in Kashkadarya region, which was under a very difficult socio-economic situation, has changed dramatically in a short period.

In June 1989 Islam Abduganievich Karimov was elected as first secretary of the Central committee of the Communist Party of Uzbekistan.

It was a time when the country was on the brink of a civil war, bloodshed, ethnic and religious conflicts, in line with the scenarios that were implemented in the neighboring countries. In this difficult period, he, with his foresight, will and determination saved our people and country from this gloomy fate.

It was then that our people acquired in the name of Islam Abduganievich Karimov a true leader with personal courage, indomitable will and vision of the essence of the ongoing extremely complex events, a special sense of responsibility for his country and people, for the fate of every compatriot.

Heading the independent Uzbekistan for 25 years, Islam Abduganievich Karimov has attained a high authority in the country and in international community as an outstanding statesman, who has developed and implemented a deeply thought-out strategy of building a democratic constitutional state with a civil society and a market economy.

Maintaining and strengthening independence of Uzbekistan has been the highest priority for President Islam Karimov and this has become a fundamental principle of his policy.

The peoples of Uzbekistan inextricably relate the great achievements of the country in the years of independence with the name and activity of the Head of our state. He is rightfully considered the author of the Constitution of the Republic of Uzbekistan, fully meeting the democratic requirements and international criteria, and has turned into a true guarantor of its implementation.

In 1991 Uzbekistan was a backward agrarian country with a hypertrophied one-sided economy, a cotton monopoly, destructively influencing it, extremely low level of people's standard of living. The country did not produce many kinds of essential goods, did not provide its own needs, primarily on grain and energy resources.

Islam Abduganievich Karimov was firmly convinced that the political independence may not be achieved without achieving economic independence. Accordingly, he developed a program of fundamental reforms and structural transformation of the economy of Uzbekistan, based on the well-known five principles, which has received worldwide recognition as the "Uzbek model" of development. The fundamental basis of this model was the practical implementation of the strategic priority - "The reforms are not for the sake of reforms, but for the sake of people."

Under his initiative, mass-scale structural reforms have been carried out in Uzbekistan, completely new highly technological spheres of industry, such as oil and gas, chemical, car manufacturing, agricultural and railway machinery, pharmaceutical, electrotechnical, textile and construction materials industries, have been founded.

A modern road-transport and engineering-communications infrastructure has been created in the country, in particular railway lines Angren-Pap with a unique tunnel through Kamchik mountain pass and Tashguzar-Boysun-Kumkurgan have been constructed, high-speed rail connection from Tashkent to Samarkand, Bukhara and Karshi has been opened, international airports have been renovated, an international logistics centre at the Navoi airport and the Uzbek national highway have been established.

Uzbekistan’s growth rates among the top 5 developing economies of the world have been a practical manifestation of the results of the reforms, implemented by President Islam Karimov.

Islam Karimov organized deep transformations in agriculture, contributing to formation of a new class of land owners- farmers’ movement. On his initiative, a program of cardinal transformation of rural areas, construction of rural houses, ensuring quality and standards of living for rural population no less than in the cities, is under implementation.

Islam Abduganievich Karimov as the Supreme Commander of the Armed Forces has ensured radical reforms, improvement of combat power and potential of the Armed Forces, capable of protecting independence, territorial integrity of the Republic of Uzbekistan, inviolability of its borders, peaceful life of our people.

He has developed and implemented the Concept of foreign policy of the Republic of Uzbekistan, the cornerstone of which is peacefulness, based on non-interference in the internal affairs of other states and addressing emerging contradictions and conflicts only by peaceful, political means. The Head of our state made a great contribution to the preservation of peace and stability in the region and around the world.

Completely abandoning the old dogmas and stereotypes, a large-scale National program for cadres training and a radical reform of the education system on the basis of the most modern international standards have been developed and practically implemented on the initiative of Islam Karimov.

Islam Karimov directly supervised the work on developing and realizing a fundamentally new system of education of the younger generation, radically changing the thinking and outlook of our youth, who are becoming the decisive force of country’s present and future.

The Head of our state raised the respectful relation to the spiritual values of our nation, preservation and development of our sacred religion, traditions and customs, the priceless heritage to the level of state policy, greatly contributed to the increase of the authority of Uzbekistan in the international arena.

Islam Karimov initiated the formation of civil society institutions, in particular increasing the rights and authority of Mahalla in the state and public administration.

Our people are well aware of and appreciate the services of Islam Karimov for large-scale creative work on radical transformation of the image of our capital - the city of Tashkent, towns and villages throughout the country in accordance with the requirements of modern urban planning and architecture.

For his outstanding contribution to formation of a sovereign and independent Uzbekistan, creation of a democratic constitutional state, maintaining civil peace and national accord and for courage, Islam Abduganievich Karimov was awarded the title Hero of Uzbekistan and was decorated with the Mustaqillik (Independence) and Amir Temur orders. He received awards from foreign states and international organizations.

He was a full member of the Academy of sciences of Uzbekistan, for his contribution to economics, science, and education he was awarded honorary doctorates from a number of foreign universities, received awards from foreign states and international organizations.

Islam Karimov infinitely loved the people of Uzbekistan and all his life, until the last few days, dedicated to the service of his country.

The bright memory of the First President of the Republic of Uzbekistan, the great son of the Uzbek people Islam Abduganievich Karimov will remain forever in the hearts of our people and the grateful memory of our compatriots.