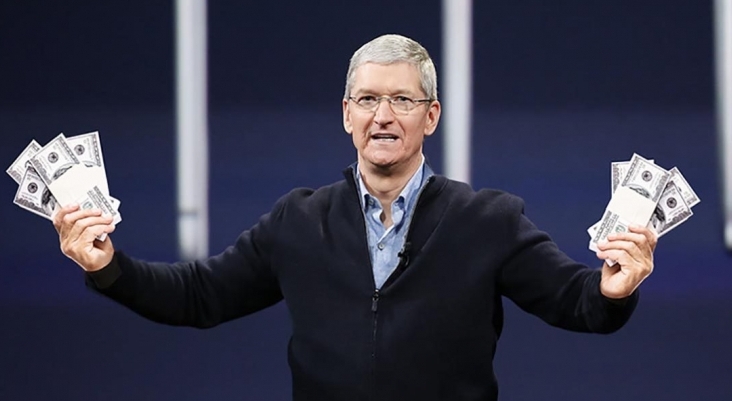 "Life beyond the iPhone": Apple gets record revenue as smartphone sales fall

Apple reported a record quarterly revenue of $64 billion. The company's New strategy is working: iPhone sales, which account for more than half of revenues, continue to fall, but revenues from services and other products are growing.

Apple's revenue in the fourth quarter of the fiscal year was $64 billion, according to the company's report. This is a record figure, it is 2% higher than the result of the same quarter of the previous year. "We ended fiscal 2019 with the highest revenue performance in the fourth quarter ended September 28. This is due to the accelerated growth of our service segments, wearable electronics and iPads, " Apple CEO Tim cook said in the release.

Revenue from sales of the company's devices in the last quarter decreased from $52.3 billion to 51.5 billion, and revenue from services, on the contrary, increased from $10.6 billion to $12.5 billion, according to the report. At the same time, operating profit fell from $16.1 billion to $15.6 billion, and net income - from $14.1 billion to $13.7 billion. the company's Profit declined all four quarters of the financial year for the first time since 2011, the Wall Street Journal notes. The company points to an increase in sales in the Americas and at the same time recognizes the decline in sales in Europe, Japan and China.

Apple expects revenue to be between $ 85.5 billion and $89.5 billion in the first quarter of the next fiscal year. " with customers excited about the new iPhone generation, the debut of the new noise-canceling AirPods Pro, the expected launch of Apple TV + and our best product and service line, we are very optimistic about what the holiday season will bring," cook said.

The company will launch the new Apple TV + service on Friday, November 1.

The news of high revenue at the end of the financial year, reflects the General trend of Apple over the past year, writes The Verge. IPhone sales, which still account for more than half of Apple's revenue, are declining, while revenues from other services are rising. It seems that the strategy of the giant from Cupertino, which relies on the development of subscription services, is working, emphasizes the publication. "Apple is proving that life beyond the iPhone exists," writes The Wall Street Journal.

"Apple's iPhone sales slump won't go away. But the company has come up with new revenue sources and relies on old ones to continue growth, " CNN notes.

Bloomberg attributes the growth in revenue from services and accessories to iPhone users buying apps for their smartphones, as well as plugging in airpods and Apple Watches and subscribing to Apple Music and iCloud. However, further growth is possible only with an increase in iPhone sales, the Agency said. "This will be a problem because consumers are not switching to new phones as often as before. According to UBS, over the past three years, the average age of a smartphone has increased by more than three months to 19 and a half months. In a survey conducted by the investment Bank, respondents said they plan to change their devices every 28.5 months, that is, after almost two and a half years, " writes Bloomberg.