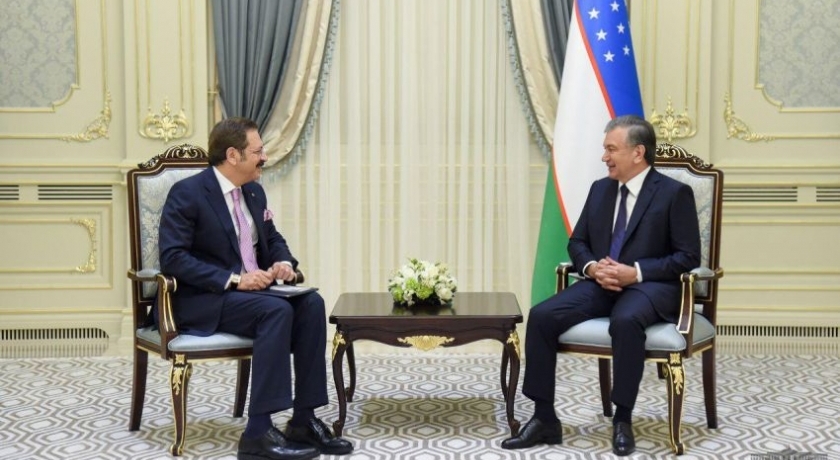 On October 4, President of the Republic of Uzbekistan Shavkat Mirziyoyev met the chairman of the Union of Chambers of Commerce and Commodity Exchanges of Turkey, Mustafa Rifat Hisarchikli oglu, who is in our country on a working visit.

The head of our state, welcoming the guest, noted with satisfaction that the relations of friendship, partnership and multifaceted cooperation between Uzbekistan and Turkey in recent years have reached a qualitatively new level.

It was especially noted that fruitful summit negotiations held in the framework of state visits in the fall of 2017 in Turkey and last spring in Uzbekistan laid a solid foundation for expanding constructive political dialogue and enhancing practical cooperation.

The importance of the full-scale implementation of the agreements and adopted agreements, the active promotion of joint projects in such areas as trade, innovation, energy, infrastructure development, transport, tourism, textile and food industries, and other sectors was emphasized.

During the meeting, Rifat Hisarchikli oglu expressed great gratitude for the warm welcome and conveyed greetings and best wishes from the President of the Republic of Turkey Recep Tayyip Erdogan.

Evidence of the growing interest of Turkish business in entering the market of Uzbekistan and strengthening business ties is the creation in recent years of more than 750 joint ventures, as well as the growth of mutual trade more than doubled.

in the implementation of priority projects and intend to discuss these issues with Uzbek partners during the upcoming first Investment Forum in Tashkent and the meeting of the Business Council of Turkic-speaking states.

At the end of the meeting, the guest confirmed his firm readiness to contribute to establishing long-term business ties and promoting practical cooperation in order to further strengthen the Uzbek-Turkish friendship and strategic partnership