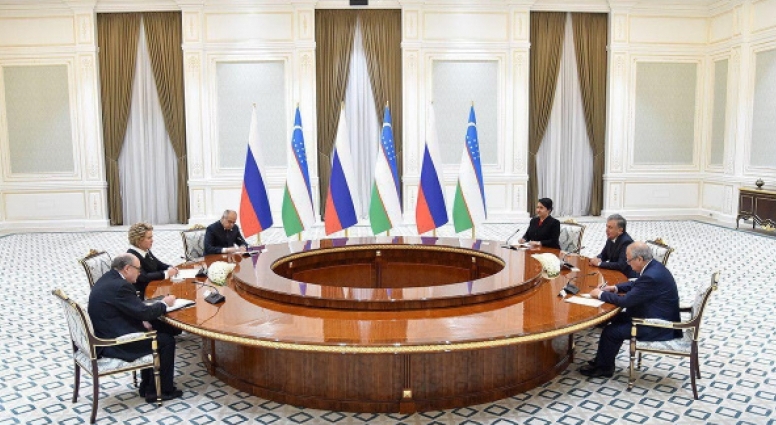 On October 2, President of the Republic of Uzbekistan Shavkat Mirziyoyev received the Speaker of the Federation Council of the Federal Assembly of the Russian Federation Valentina Matviyenko, who is on an official visit to Uzbekistan.

Warmly welcoming the distinguished guest, the Head of the state sincerely congratulated Valentina Matviyenko on her re-election as the Speaker of the upper house of the parliament of the Russian Federation and wished success in her responsible activity.

The current level of Uzbekistan – Russia friendship, strategic partnership and alliance was noted with deep satisfaction.

It was emphasized that regular and productive contacts at the highest level, the state visit of the President of Russia to Uzbekistan in October last year gave a powerful impetus to the expansion of full-scale cooperation between the two countries, filling it with specific content.

In turn, Valentina Matviyenko expressed sincere gratitude to the President of Uzbekistan for the warm welcome and conveyed the greetings and best wishes of the President of the Russian Federation Vladimir Putin.

It was noted that the visit of the parliamentary delegation of Russia is another testament to the commitment of the two countries to further strengthen multifaceted cooperation.

At the meeting, current issues of bilateral relations, active participation of the parliaments of the two countries in implementation of high-level agreements and promotion of promising projects in trade-economic, investment, innovative, transport and logistics, agricultural and scientific-technical fields, as well as the expansion of educational and cultural humanitarian exchange, were considered.

The need for further cooperation within the framework of international inter-parliamentary organizations was emphasized.

Views were exchanged on the current issues of the international and regional agenda.

Speaker of the Federation Council reaffirmed her commitment to the consistent development of inter-parliamentary relations in order to comprehensively strengthen Uzbekistan – Russia multifaceted relations.

Valentina Matviyenko wished successful conduction of the upcoming elections to the Legislative Chamber of the Oliy Majlis of the Republic of Uzbekistan and local representative authorities this year.