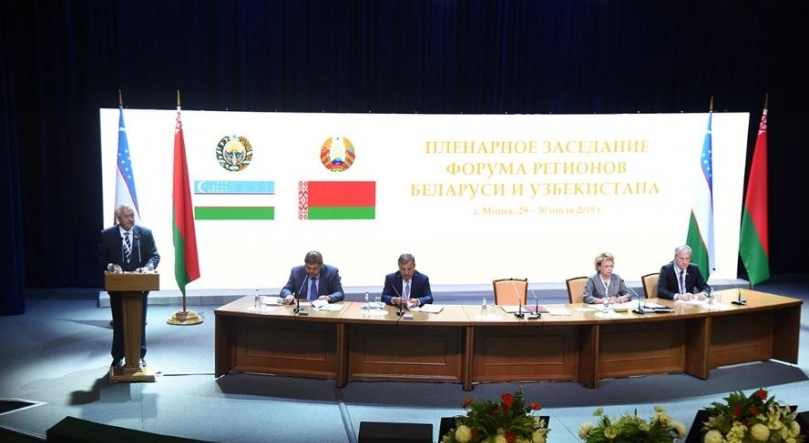 Interregional forum of Uzbekistan and Belarus, organized in Minsk, where active preparations are underway for the upcoming official visit of the President of the Republic of Uzbekistan Shavkat Mirziyoyev, continued with a plenary session on “Interregional cooperation is an important factor in development of intergovernmental relations”. Special attention was paid to issues of further expanding cooperation between the two countries in such areas as industrial cooperation, agriculture, food industry, education.

At the meeting, attended by parliamentarians and government members, representatives of large companies, businesspeople and regions, it was noted that this forum serves to raise interaction of the two countries to a new, higher level.

At the event, implementation of the roadmap adopted between the two countries was discussed on the example of cooperation between Syrdarya and Minsk regions.

Signing a number of commercial contracts and agreements on the margins of the interregional forum is a vivid example of effectiveness of this platform of dialogue between the regions.

A bust to the great poet and thinker Alisher Navoi is erected in the central square of the city of Minsk. The event on the occasion of its opening became a huge event in the new milestone of cultural cooperation between the two countries. For the bust to Navoi is the first monument erected in Belarus as a sign of reverence for the geniuses of the East.

Solemn opening ceremony of the Days of Culture of Uzbekistan took place at the Belarusian State Philharmonic. Artists from the two countries, writers and poets, the general public, and young people attended the event.

Representatives of ministries of culture of the two countries addressed the opening ceremony of the event. It was noted that this event is important in strengthening mutual cultural ties and familiarizing the Belarusian people with the masterpieces of the Uzbek national culture.