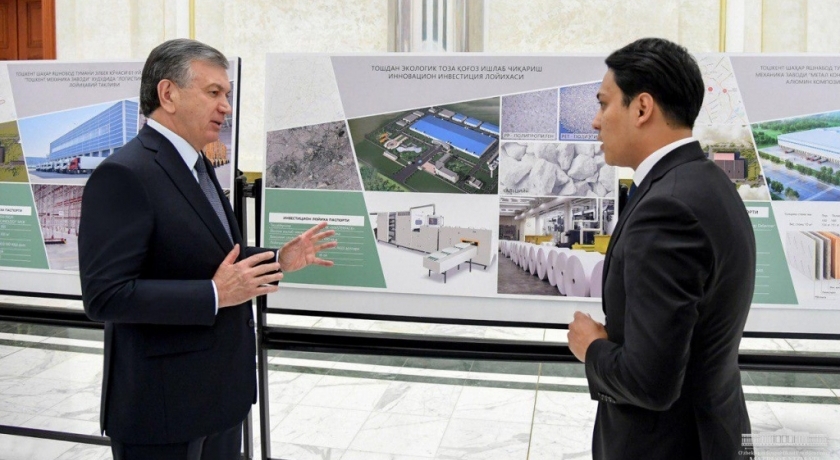 New investment projects, to be implemented in Tashkent, are discussed

On May 20, the President of the Republic of Uzbekistan Shavkat Mirziyoyev got acquainted with promising investment projects planned to be implemented in the city of Tashkent.

At an off-the-schedule session of Tashkent City Kengash of People’s Deputies on 21 December 2018, tasks were outlined to transform the capital into a large business center by actively attracting investments and establishing modern enterprises. On 4 January 2019, a resolution of the Cabinet of Ministers of the Republic of Uzbekistan “On additional measures to attract foreign direct investments into the infrastructure development of Tashkent city” was adopted.

Today, steadfast efforts are undertaken in the capital to establish high-tech industries and expand the production of high value-added goods with the efficient use of infrastructure of small industrial zones and technoparks. This issue is under the constant attention of the Head of the state. At the meeting held by the President on May 13 this year, the current activity on creation of modern industrial enterprises in Tashkent with attraction of foreign direct investment was analyzed.

In accordance with directives given earlier, 19 new investment projects for a total amount exceeding 617 million US dollars have been prepared for implementation in the city of Tashkent.

Crucially, over 10,000 jobs are expected to be created under these industrial projects. There will be the possibility of annual production of goods in demand in the amount of about 1 billion dollars and export of goods for more than 290 million dollars a year.

The projects provide for the production of goods with high value-added and localization level, including a wide range of household appliances, elevators and excavators, pumps, water heaters, paper and building materials, food products, household chemicals, jewelry and glasses.

Investors and initiators presented their projects. The enterprises are due to be established during 2019-2020 in unused buildings and areas of Tashkent Mechanical Plant.

The President noted that such projects are important for production of goods in high demand and provision of the population with work. Shavkat Mirziyoyev gave directives for the soonest launch of the presented projects, effectively using the existing infrastructure of the city. Responsible officials were instructed to develop additional project proposals for a total amount of at least 1 billion USD, providing for the organization of production of industrial goods.