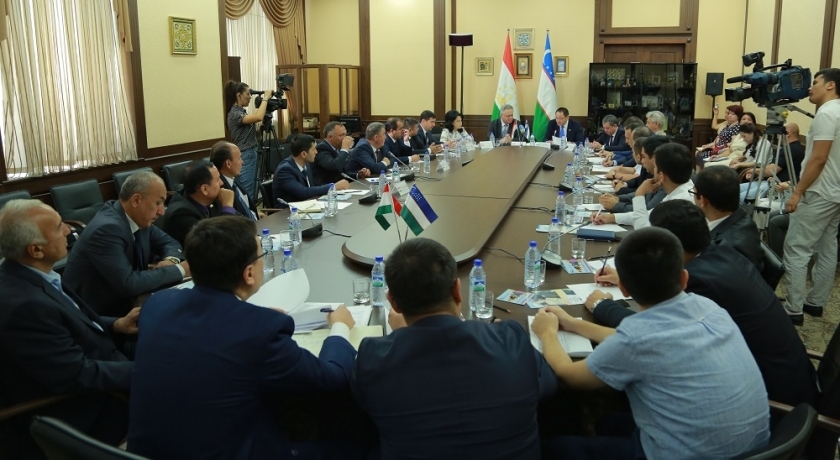 On August 18, the second meeting of the Uzbek-Tajik Business Council

Within the framework of the state visit of the President of the Republic of Tajikistan Emomali Rahmon to the Republic of Uzbekistan on August 18, 2018, the second meeting of the Uzbek-Tajik Business Council was organized in the Chamber of Commerce and Industry of Uzbekistan.

The event, which was organized with the participation of representatives of ministries and departments, industrial enterprises and economic entities of Uzbekistan and Tajikistan, provided an opportunity for representatives and government representatives to discuss proposals and recommendations on expanding cooperation in industrial cooperation, implementing investment projects, as well as trade and commerce.

From the Uzbek side, the leadership of the Chamber of Commerce and Industry of Uzbekistan, the Ministry of Foreign Trade, the State Customs Committee, the Agency of Automobile and River Transport, the representatives of JSC "Uzbekkozovaktovholding", JSC "Uzeltehsanoat", JSC "Uzstroymaterialy", Association "Uztekstilprom", JSC "Uzbekistan Temir Yullari" and others.

The Tajik side was represented by the leadership of the Chamber of Commerce and Industry and the leaders of the regional chambers of the Sughd and Khatlon regions, major manufacturers of building materials, metallurgical and pharmaceutical enterprises in Tajikistan. 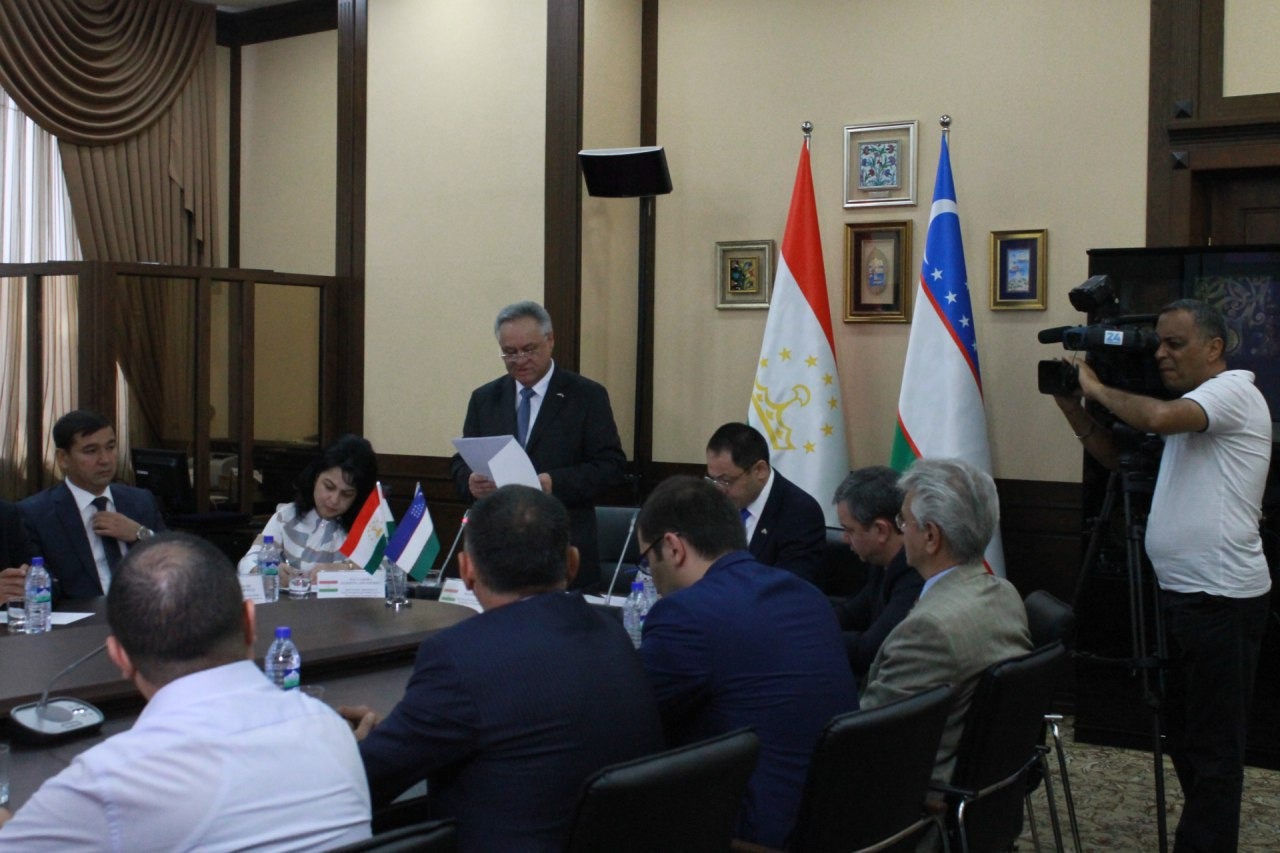 Members of the Business Council were acquainted with the activities of this structure for the period of its establishment and the holding of the first meeting.

During this period, the Business Council focused on the development of interregional cooperation between Uzbekistan and Tajikistan, in particular, between Surkhandarya and Khatlon, Samarkand, Tashkent and Sughd regions.

The members of the Business Council noted the results of the mutual introduction of visa-free regime for citizens of the two countries for up to 30 days, the opening of a new railway through the Galaba-Amuzang crossing point, as well as the resumption of 16 border checkpoints between the republics, which resulted in the first half of 2018 . the volume of imported international rail freight increased 6.4 times, and road transport 5.8 times.

In this context, it is noted that the Business Council will serve as a convenient platform for identifying and resolving issues related to trade and economic cooperation and increasing trade between the two countries, at the level of sectoral organizations and ministries, without waiting for the meetings of the Intergovernmental Commission. 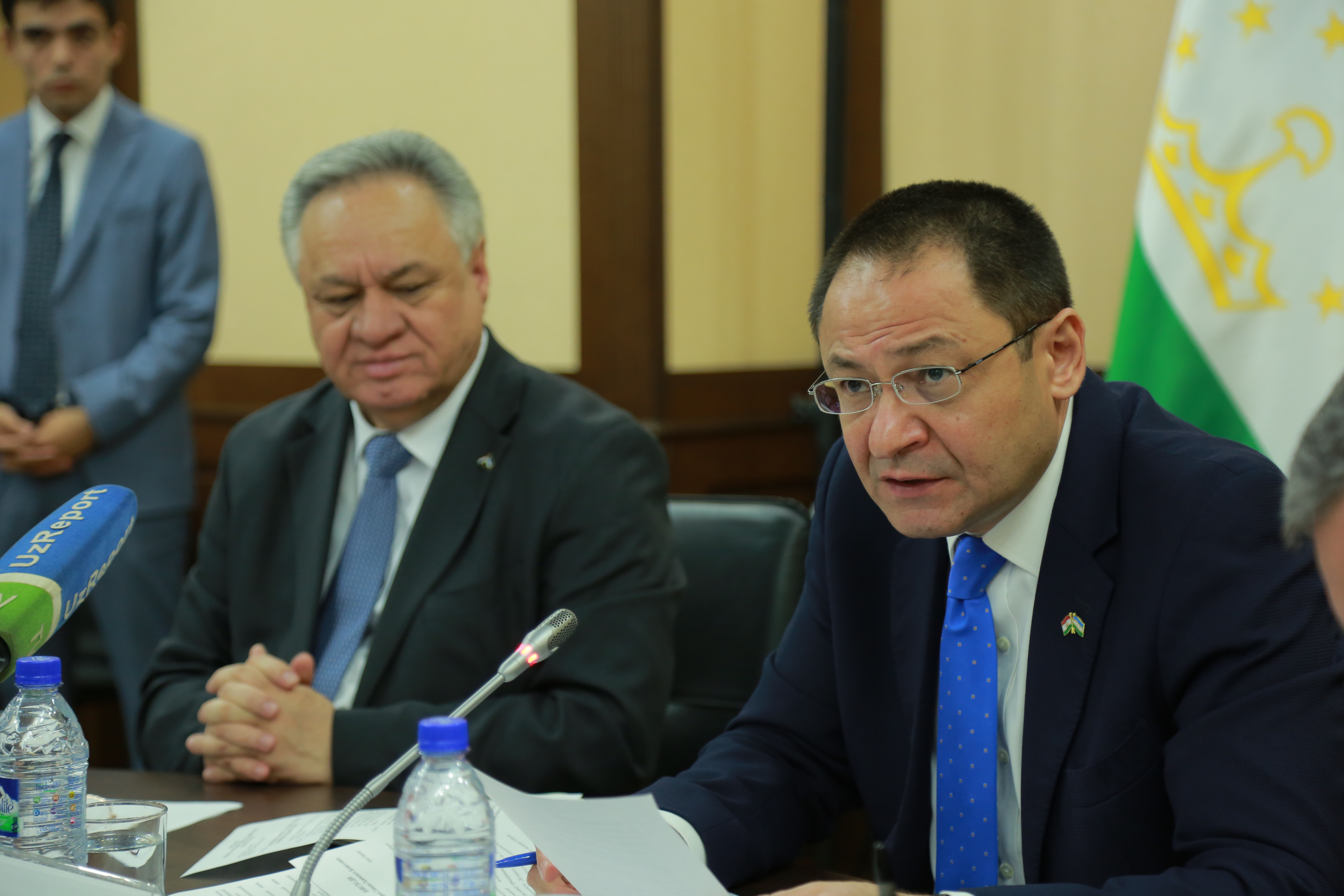 "The main directions of our joint work will be further development of industrial cooperation and finding optimal solutions in the issues of logistics of exports and imports of products, which in future will lead to optimization and lower prices in the markets of the two countries," A.Ikramov said.

The participants of the event noted the agreements reached within the framework of the visit of the President of the Republic of Tajikistan E.Rahmon to the Republic of Uzbekistan. 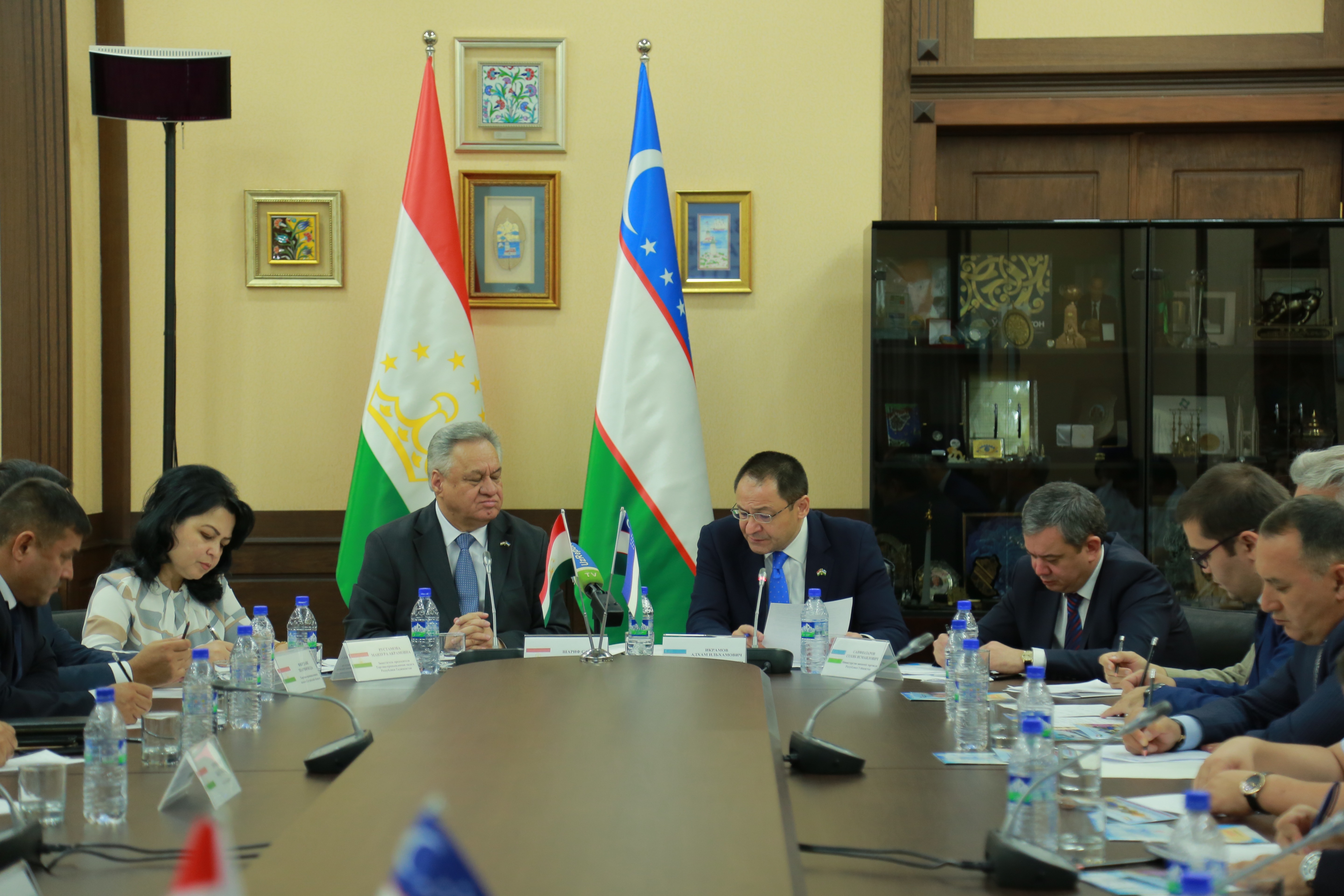 According to the chairman of the Chamber of Commerce and Industry of the Republic of Tajikistan, the chairman of the Tajik part of the Business Council Sh. Said - "The historic event was the signing of the Treaty on Strategic Partnership between our republics in the framework of the State visit of the President of the Republic of Tajikistan to the Republic of Uzbekistan. Effective use of the potential of the Business Council will provide an opportunity to assist business representatives of the two countries in the qualitative and expeditious resolution of certain issues impeding their activities. " 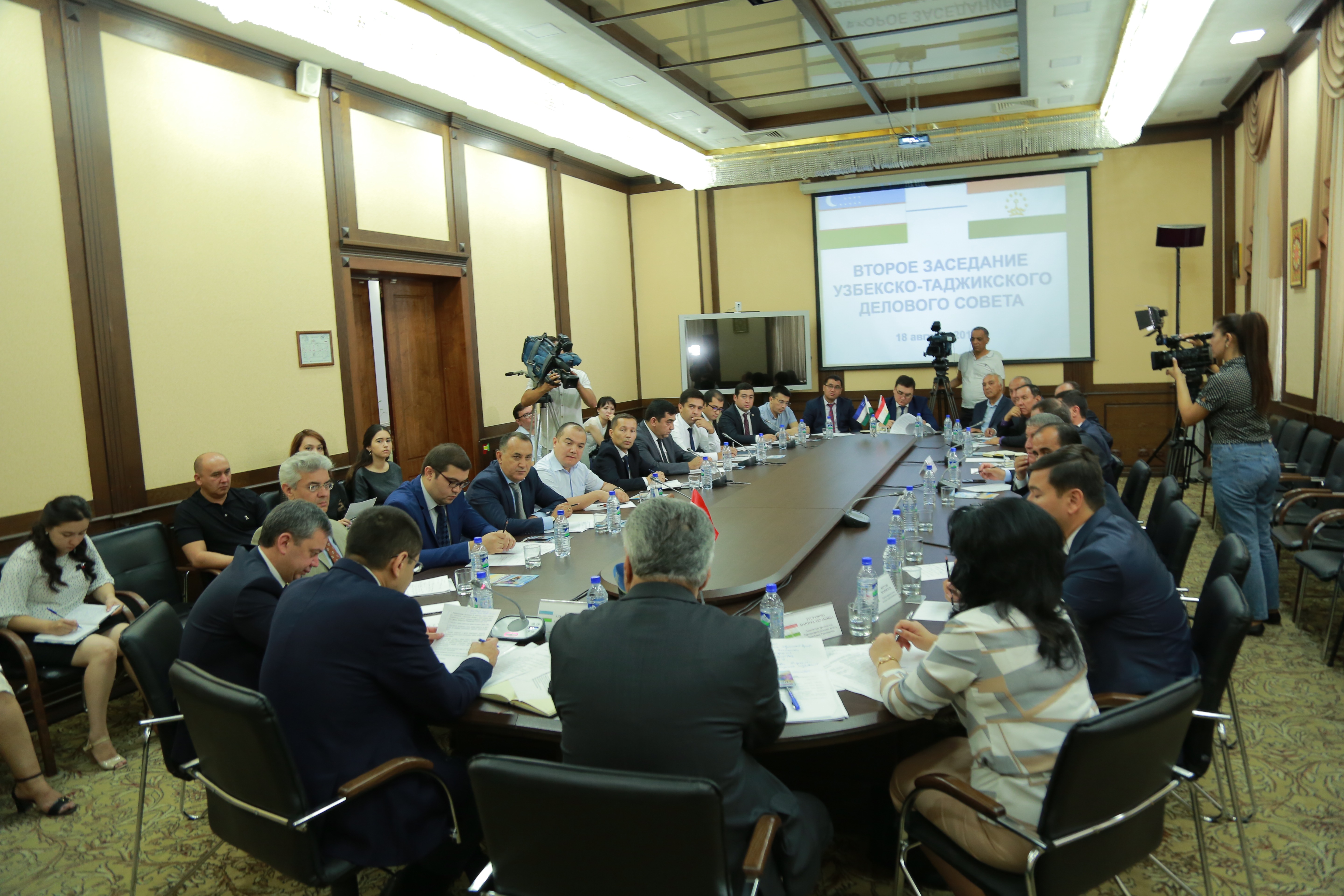 Deputy Minister of Foreign Trade of the Republic of Uzbekistan S.Saifnazarov noted that following the results of bilateral "B2B" meetings between enterprises of Uzbekistan and Tajikistan, 58 contracts and agreements worth $ 133.2 million were signed.

During the event, the members of the Business Council made proposals on the development of bilateral cooperation and possible presentation for consideration of the next meeting of the Joint Intergovernmental Commission issues, in particular:

- JSC "Uzstroymaterialy" together with JSC "Uzbekiston Temir Yulari" studying the issues of improving the logistics of imported cement, coal and other building materials from Tajikistan;

- JSC "Uzfarmsanoat" to study the issues of creating pharmaceutical production in Sughd region (Tajikistan) together with the company JSC "Doruy Tozhik";

- JSC "Uztekstilprom" studying the expansion of industrial cooperation in the production of carpet products in conjunction with Tajik companies for their subsequent export to third countries;

- JSC "Uzeltehsanoat" increased the supply of Uzbek copper to Tajikistan, the establishment of industrial cooperation in the electrical industry with the Tajik side;

- JSC "Uzstroymaterialy" to consider issues of supplies of Tajik quartz sand to Uzbekistan for further processing, as well as supply of glass containers to the market of Tajikistan for producers of wine and vodka products;

- the development of cooperation between honey producers of Uzbekistan and Tajikistan through the Association of Beekeepers of Uzbekistan, including consideration of the possibility of attracting loans from commercial banks of the country for the implementation of joint projects under the "Every Family-Entrepreneur" program.

As a result of the event, the parties reached an agreement on organizing the next meeting in Dushanbe before the end of 2018.