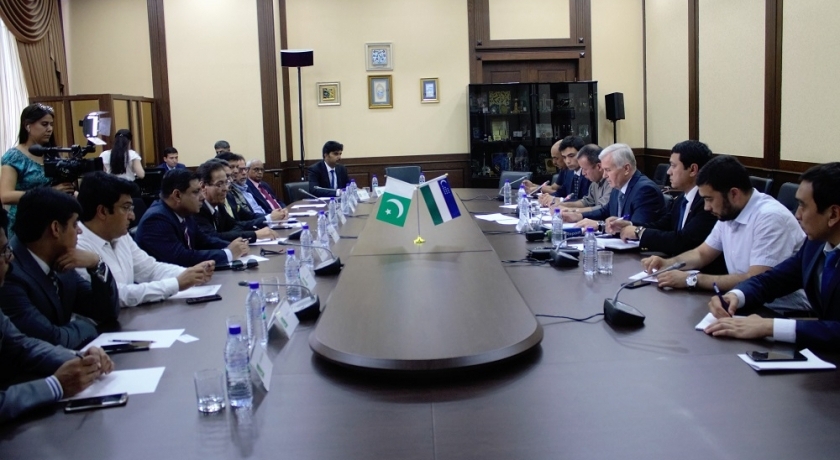 In 2018 there is a significant increase in business cooperation between enterprises of Uzbekistan and Pakistan.

So, in March 2018, the Chamber of Commerce and Industry of Uzbekistan and the Center for Global and Strategic Studies of Pakistan signed an agreement on the establishment of the Uzbek-Pakistan Business Council, in April, its first meeting was held in Islamabad.

In order to further develop trade and economic relations between Uzbekistan and Pakistan, the Chamber of Commerce and Industry of Uzbekistan jointly with the Embassy of the Republic of Uzbekistan in Islamabad organized a visit of business circles to Uzbekistan led by Deputy Chairman of the Uzbek-Pakistan Business Council Vasik Ali Khan.

Within the framework of the visit on June 9, 2018, the delegation met with First Deputy Chairman of the Chamber of Commerce and Industry of Uzbekistan I.Zhasimov.

During the meeting, the Pakistani side was acquainted with the state of development of the business environment in Uzbekistan. The parties also discussed the possibility of increasing the supply of Uzbek products to the Pakistani market in particular, chemical and shoe products, vegetables and fruits, agricultural machinery and agricultural equipment, as well as tourist services.

As promising areas, the expansion of cooperation in the pharmaceutical industry and the involvement of leading Pakistani manufacturing companies in the special economic zones of Uzbekistan with a pharmaceutical profile were noted.

Following the meeting, an agreement was reached to implement joint projects and submit proposals to the secretariat of the Uzbek-Pakistani Business Council on the development of bilateral economic ties.

The parties also reached an agreement on the organization in September 2018 the second meeting of the Business Council in Tashkent.

Within the framework of the visit of the delegation it is planned to visit historical cities of the republic - Samarkand and Bukhara, also meetings in the State Committee for the Development of Tourism were held.

The visit of the delegation continues until July 12, 2018.

It should be noted that Uzbekistan is the largest trading center of Pakistan in Central Asia. The trade turnover in 2017 was $ 36.2 million. In 2017 the work of the permanent exhibition "Made in Uzbekistan" was organized at the Embassy of Uzbekistan in Islamabad and direct air communication between the cities Tashkent and Lahore were resumed.