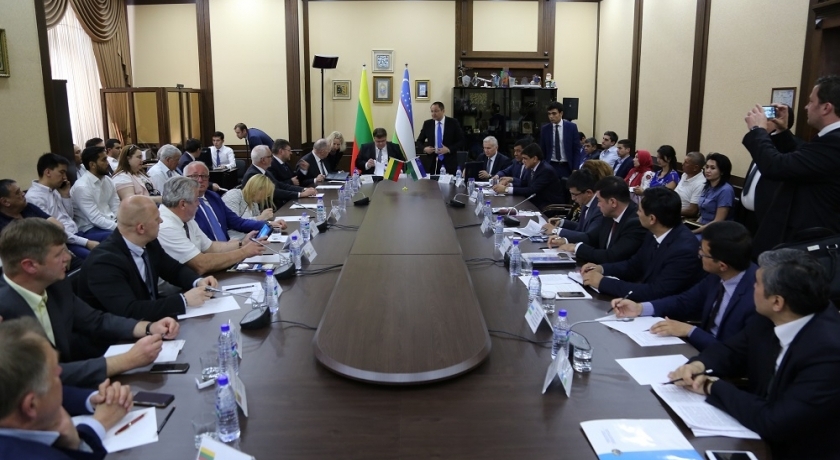 A round table on the topic "Prospects for the development of trade, economic and investment cooperation between Uzbekistan and Lithuania" was held at the Chamber of Commerce and Industry

On May 8, the Chamber of Commerce and Industry of the Republic of Uzbekistan held a round table on the theme: "Prospects for the development of trade, economic and investment cooperation between Uzbekistan and Lithuania" with the participation of the Minister of Foreign Affairs of the Republic of Lithuania, Linas Antanas Linkevičius, and the business circles of the two countries.

The structure of business circles of Lithuania included companies engaged in forwarding and logistics, training of specialists in the field of medicine, processing of electronic waste, as well as business consulting.

The purpose of this event is to facilitate the establishment of trade relations between companies of Uzbekistan and Lithuania, working out the issues of creating new joint ventures and implementing new investment projects.

During the business meeting, issues of mutual cooperation on strengthening cooperation between entrepreneurs of the two countries were discussed.

During the event, participants were introduced to the large-scale economic reforms being carried out in Uzbekistan, it should be noted that by the end of 2017 the trade turnover between the countries amounted to about 260.0 million dollars.

Currently, 14 enterprises operate in Uzbekistan with the participation of investors from Lithuania, of which 3 - with 100% Lithuanian capital.

Accredited representative offices of 2 companies from this country.

As a result of the round table, the parties discussed the priority areas for the development of cooperation, primarily in the trade, economic and investment spheres.

Also, B2B meetings were held between business circles of the two countries, which will serve as an additional incentive for the development of business cooperation, as well as attracting foreign investment with a view to implementing joint projects.