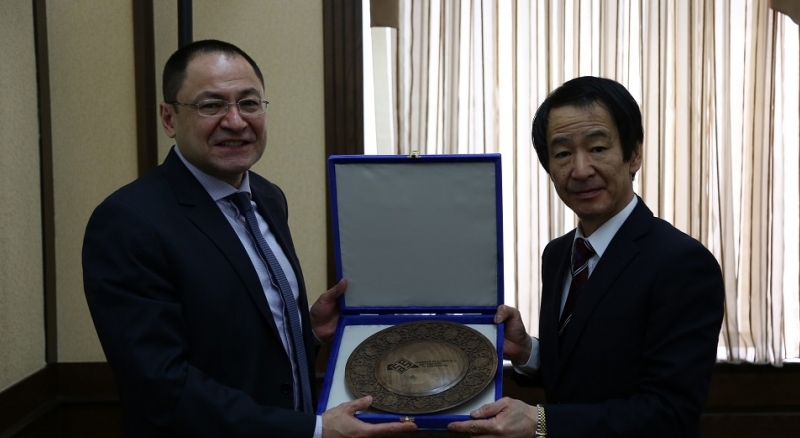 A new stage of cooperation between Uzbekistan and Japan

In the Republic of Uzbekistan, they cherish the relationship of sincere friendship, strategic partnership and cooperation with Japan.

It should be noted that over the past period, our countries have made significant progress in deepening mutually beneficial cooperation at the bilateral and multilateral levels.

In order to expand the established partnership relations between Uzbekistan and Japan, the Chamber of Commerce and Industry of Uzbekistan held a meeting with the extraordinary and authorized ambassador of Japan, Mr. Nobuaki Ito.

Chairman of the Chamber of Commerce and Industry of the Republic of Uzbekistan A.Ikramov in his speech greeted Nobuaki Ito and expressed gratitude for the assistance provided in the development of trade, economic and investment cooperation between the two states.

It should be noted that the two countries established mutually beneficial cooperation in the political, trade-economic, financial-investment, technological, scientific and cultural-humanitarian spheres.

An example of this is the fact that since 1999, the regional branches of the Japan International Cooperation Agency (JAICA) and the Japan Foreign Trade Organization (JETRO) and the Uzbek-Japanese Center operate in the Republic of Uzbekistan.

Ambassador of Japan Mr. Nobuaki Ito highly appreciated the large-scale economic reforms, the measures taken to liberalize the economy and the currency market, to improve the business environment, to support business, to protect the rights and legitimate interests of small businesses and private entrepreneurship, to increase the investment attractiveness of the country's economy, as well as the conditions for foreign investors in existing and newly created (Free Economic Zones).

During the meeting, in order to further intensify cooperation on establishing partnership relations between entrepreneurs of the two countries, an agreement was reached on signing an Agreement on Cooperation between the Chamber of Commerce and Industry of Uzbekistan and the Chamber of Commerce and Industry of Japan, the organization of visits of delegations of business circles of Japan to the Republic of Uzbekistan in 2018-2019 which will serve to establish business contacts between Uzbek and Japanese companies and establish joint ventures. The Chamber of Commerce and Industry was also invited to consider the possibility of participation of Uzbek entrepreneurs engaged in the production and / or processing of food products, on a preferential or free basis at the International Specialized Exhibition-Fair "FOODEX 2018" in Japan every year, attracting a preferential loan for enterprises of the ICBM in order to purchase Japanese equipment and the technologies under the state concessional yen credits of the Official Development Assistance (ODA) program and the Japan Bank for International Cooperation (JBIC).

It should be noted that such meetings and agreements create the basis for further cooperation between Uzbekistan and Japan.