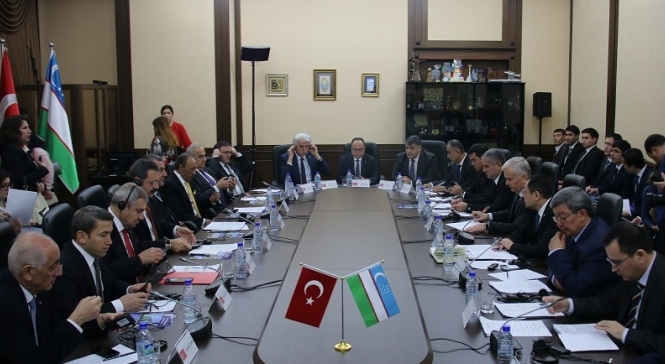 Within the framework of the visit of the delegation of business circles of the Turkish Republic headed by the President of the Union of Chambers of Commerce and Commodity Exchanges of Turkey to the Republic of Uzbekistan, The Chamber of Commerce and Industry of the Republic of Uzbekistan hosted the Uzbek-Turkish Business Forum on December 25 with the participation of Uzbek and Turkish companies, which will serve as an additional incentive for the development of business cooperation, as well as attracting foreign investment with the goal of creating joint ventures.

The purpose of the event was to facilitate the establishment of trade relations between Uzbek and Turkish companies, to work out the issues of creating new joint ventures and implementing new investment projects.

The event was held in the format of speeches from the Uzbek and Turkish sides. During the business meeting, issues of mutual cooperation on strengthening cooperation between entrepreneurs of the two countries were discussed. During the forum it was noted that this meeting is an opportunity for a thorough exchange of views on the prospects for the development of bilateral cooperation. The economic and investment potential of the two states was demonstrated, directions for cooperation at a new stage were outlined.

During the forum, it was noted that Uzbekistan's and Turkey's desire for mutual partnership is an important step in the history of the two countries for the sake of the future.

It should be noted that Turkey is one of the important trade partners of Uzbekistan. In 2016, the volume of trade amounted to 1.2 billion US dollars. For 9 months of this year, the indicators of mutual trade increased by 29%.  About 500 Turkish companies operate in our country. Only this year in Uzbekistan, more than 20 enterprises with the participation of Turkey's investments are organized, 53 companies are accredited.

An important impulse in the development of trade and economic cooperation is the state visit of the President of the Republic of Uzbekistan Shavkat Mirziyoyev to Turkey, which was held at the invitation of the President of the Republic of Turkey, Recep Tayyip Erdogan, on October 25, 2017.  In which, following the results of the negotiation, more than 20 documents on various spheres of cooperation between Uzbekistan and Turkey were signed.