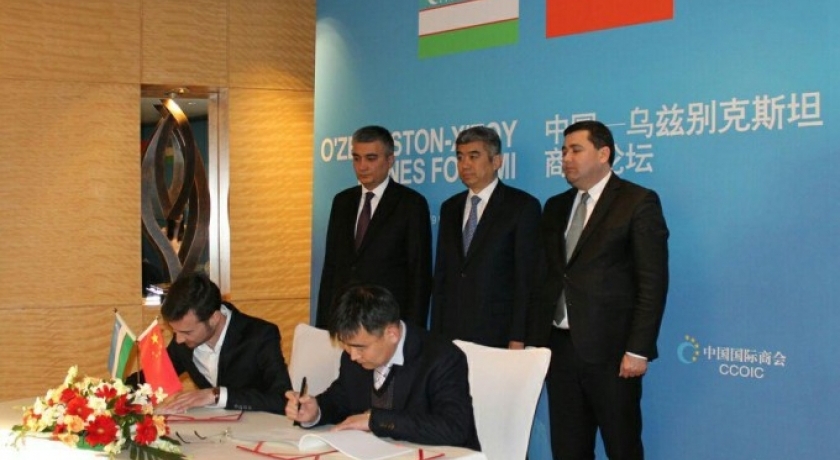 The Uzbek-Chinese business forum was held in Beijing

The Uzbek-Chinese business forum was held in Beijing

The Chamber of Commerce and Industry of Uzbekistan organized a visit of a delegation of Uzbek business circles to the cities of Beijing and Shanghai (PRC) in the period from December 19 to 20, 2017, which was attended by more than 15 entrepreneurs of Uzbekistan.

Within the framework of the visit, the Chamber of Commerce and Industry of Uzbekistan jointly with the Chinese Council for the Promotion of International Trade (KSSMT), with the assistance of the Uzbek Embassy in Beijing, organized the Uzbek-Chinese business forum with the participation of more than 150 Chinese enterprises.

During the Forum, the export and investment potential of the Republic of Uzbekistan was presented. The participants of the event were thoroughly acquainted with the large-scale and systemic economic reforms being carried out in the country aimed at creating a favorable business environment and an attractive investment climate.

At the same time, attention was paid to the measures taken to support entrepreneurship and business development, the creation of a fundamentally new and strong system for guaranteeing and protecting the rights and legitimate interests of business entities, attracting the population to create their own business, facilitating the procedures for implementing foreign economic activity.

The Chinese participants showed great interest in the latest decisions of the Uzbek leadership on liberalization of the foreign exchange market and export-import transactions, as well as free economic and small industrial zones created in the country with attractive working conditions for foreign investors.

Representatives of Chinese companies that are already working in Uzbekistan, in their speeches, noted the favorable conditions created in the country for foreign investors, the availability of a rich mineral and raw materials base, as well as highly skilled labor, which creates the necessary conditions for the establishment of production of competitive products, the developed infrastructure provides convenient logistics for entering the markets of the CIS countries.

Participants of the Forum were shown a video about the investment potential of the Republic of Uzbekistan.

Within the framework of the event, bilateral meetings in the "B2B" format between entrepreneurs of the two countries were held.

As a result of the meetings, agreements were signed for a total amount of more than $ 30 million.

Today on December 20  t.y.  was held the Uzbek-Chinese business forum in Shanghai