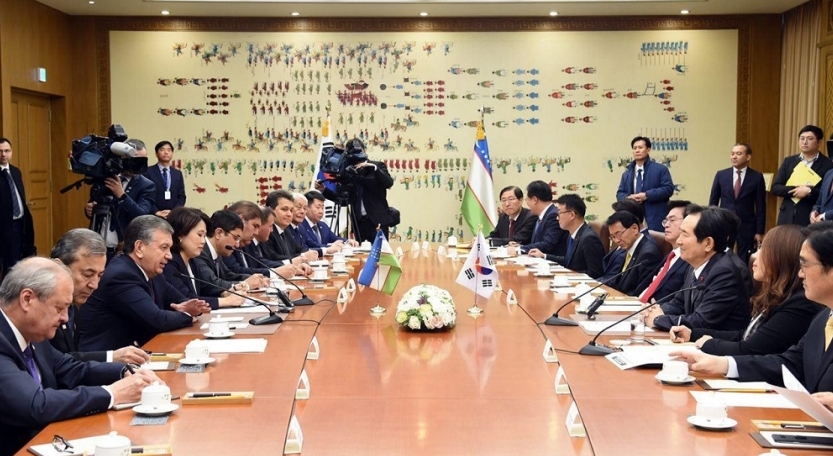 Within the framework of the state visit of the President of the Republic of Uzbekistan Mirziyoyev  Shavkat  Mironovich to South Korea on November 22 - 25, 2017, the Uzbek-South Korean business forum was held with the participation of government leaders and representatives, leading companies and financial institutions of the two countries.

In his speech, President of the Republic of Uzbekistan Sh.Mirziyoyev noted Uzbekistan's interest in attracting Korean investments, technologies and management in the development of the economy. He spoke about the measures taken to improve the business environment: liberalization of economies, the foreign exchange market, foreign trade, the market of primary commodities and energy, etc.

Particular attention was paid to the issues of support and development of small and medium-sized businesses. President Sh.Mirziyoyev informed the forum participants about his intention to establish a Korean Business Center at the Chamber of Commerce and Industry of Uzbekistan. It will provide practical assistance and support to Korean companies in Uzbekistan in the "one-stop-shop" mode.

Speaking at the Forum, Deputy Prime Minister, Minister of Finance and Strategy of South Korea Kim Dong Yong read out a special message from the President of the Republic of Korea, Mr. Mun Zhe In, to the Forum participants, who noted the strategic nature of bilateral relations and the key role of Uzbekistan in South Korea's Eurasian policy. The confidence in the prospects of bilateral multifaceted cooperation is underlined and the importance of further expansion and deepening of trade, economic and investment cooperation between the sides is underlined.

In his speech, the Minister of Trade, Industry and Energy of the Republic of Korea Pak Ungu noted that today bilateral relations are successfully developing in three directions:

-expansion of production of goods with high added value;

-development of business in the field of extraction of rare metals and gas-chemical sector;

-cooperation in the field of renewable energy.

The importance of expanding relations in the sphere of education was also noted. Pak Ungu expressed the willingness of the Korean side to bring the logistics center of Navoi to the leaders of the region in its sector.

Within the framework of the Forum, the book "President of the Republic of Uzbekistan Shavkat  Mirziyoyev" was presented published in hardcover with a circulation of 50 thousand copies.

The reforms in various areas initiated by the President are analyzed, such as economic liberalization, measures to attract foreign investment, liberalization of the currency market, social protection of the population, a new policy in relation to the regions of the country, reforms in education and health, upholding the principles of freedom of speech and protecting the rights of citizens, general democratization and liberalization in society.