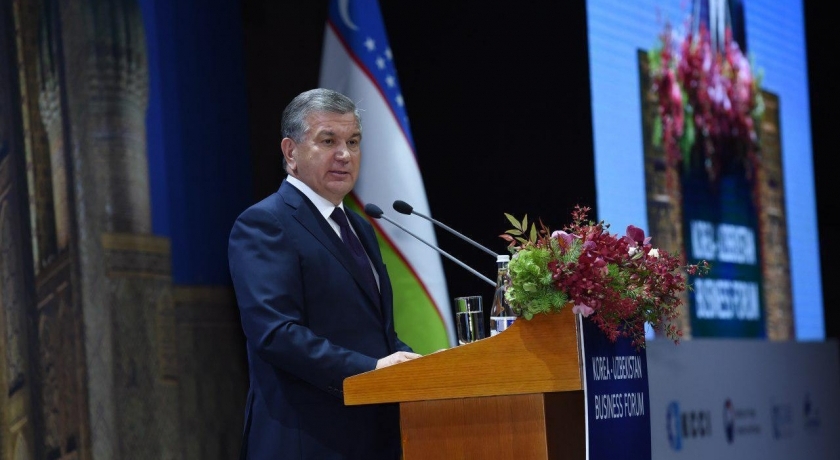 Today in Seoul, during the state visit of the President of Uzbekistan to the Republic of Korea, the head of our state Shavkat Mirziyoyev took part in the Uzbek-Korean business forum.

The forum was attended by heads of economic and financial structures, leading businessmen of the two countries.

Then, the President of the Republic of Uzbekistan Shavkat Mirziyoyev delivered a speech.

At the beginning of his speech, he noted that the message of the President of Korea to participants of the business forum is of great importance in strengthening trade and economic ties and will serve as a strong bridge between the two countries.

The President of Uzbekistan noted that there are many similarities between Uzbekistan and the Republic of Korea in various fields.

He also underlined that Uzbekistan has widely opened the doors for Korean entrepreneurs.

The President of Uzbekistan noted that at present a whole range of measures is being implemented in the country aimed at facilitating business and protecting foreign investments. In the course of his speech, President Mirziyoyev gave specific instructions to the heads of financial and economic departments of Uzbekistan who attended the meeting to establish close cooperation with Korean businessmen.

Below are some quotes from the speech of President Mirziyoyev:

"The Republic of Uzbekistan and the Republic of Korea are reliable partners, time tested and life itself. Today, our multi-faceted relations are dynamically developing and strengthening in all directions.

Uzbekistan strongly supports the policy of the distinguished President of the Republic of Korea, Mr. Mun Jae-Ing, on the settlement of the North Korean problems, ensuring peace and security on the Korean peninsula.

We are interested in attracting investments, advanced technologies and management of Korean companies to the development of the economy of Uzbekistan. We have something to offer the Korean business.

We have all the opportunities to increase the volume of bilateral trade and mutual investments several times.

I would like to inform you that we intend to establish the Korean Business Center at the Chamber of Commerce and Industry of Uzbekistan headed by Adham Ikramov.

Present in this room:

I and the Government of Uzbekistan will provide all-round assistance and support to every Korean investor and every joint project in Uzbekistan.

You cannot doubt it "

After the speech of President Mirziyoyev, the floor was taken by Deputy Prime Minister, Minister of Strategy and Finance of the Republic of Korea Kim Dao Yong.

He underlined that he listened with great excitement and interest to the speech of the President of Uzbekistan. He said that in his practice he did not meet such a leader of the state paying so much attention to the development of his country and the support of business.

Then the Minister of Trade, Industry and Energy of the Republic of Korea Paik Ungu spoke. He stressed that the Korean side sees the development of relations with Uzbekistan in three main strategic directions: the first - expansion of production of goods with high added value; second - development of business in the field of mining of rare metals and gas-chemical sector; the third is cooperation in the field of renewable energy.