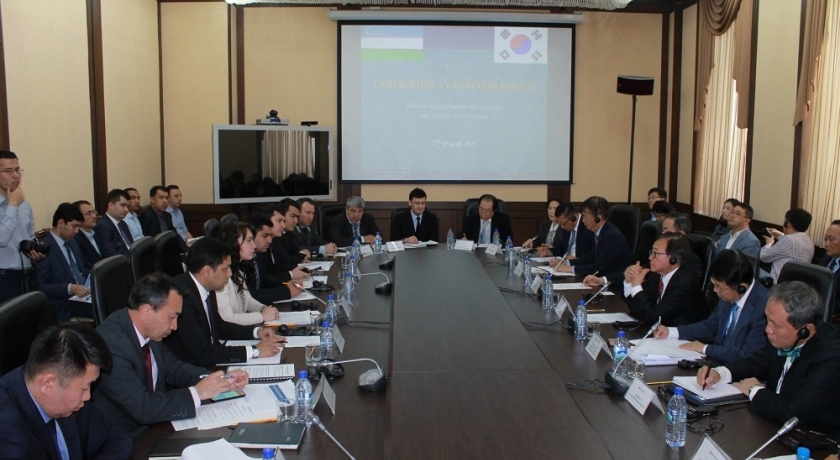 The delegation of business circles of the Republic of Korea headed by the Director-General of the Ministry of trade, industry and energy Kang Myung-soo has arrived in Uzbekistan on 26 April, and will stay until 29 April.

The guests started their stay with a visit to the chamber of Commerce of the Republic of Uzbekistan, where they attended a business forum and cooperation exchange. During the business meeting, they discussed issues of mutual cooperation on the strengthening of interaction between entrepreneurs of the two countries.

The purpose of the event is the establishment of trade relations between the Korean producers and the Uzbek partners, as well as elaboration of issues on creation of new joint ventures in the sphere of manufacture of components and spare parts for cars in Uzbekistan.

According to the State Statistics Committee of the Republic of Uzbekistan, the volume of mutual trade in 2016 amounted to $1048.6 million, including export – $184.1 million, import – $864.5 million.

The volume of direct investments of the Republic of Korea attracted into the economy of Uzbekistan exceeded $7 billion.

The number of enterprises with South Korean capital today stays at 461, including 75 - with 100% Korean capital. The activities of these companies are mainly concentrated in trade, oil and gas, petrochemical and chemical, mining, machinery, electrical and textile industry, ICT, transport and logistics, tourism, etc.

The Korean language is taught at 13 high schools, 28 schools, lyceums and colleges.